Home | Sports Medicine | Swimming and Cupping: Is Michael Phelps Onto Something? 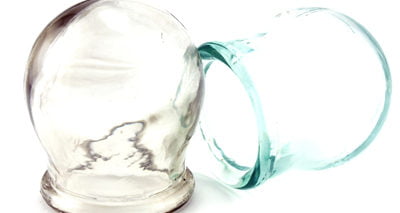 Michael Phelps entered the pool deck at the Rio Olympics, stripped down for competition, and characteristically slapped his arms and shoulders immediately before his race. But the eyes of the world were on something even more conspicuous than the time clock and his medal count. Those millions of viewers noticed bruises the size of baseballs decorating his strong shoulders. The marks might have led one to think his bouquet of medals smacked him.

But the bruises Phelps sported come from cupping, or suction cup therapy, a training modality that Phelps has used in his routine for the past couple of years. Cupping is an ancient therapy that has been around for thousands of years, originally practiced by Chinese, Egyptian and Middle Eastern cultures. Cupping’s origins were to pull toxins out of snakebites and infections. In the case of athletes in contemporary times, however, it is used to promote blood flow, relieving pain and swelling. In turn, this leads to an easing of muscle soreness. Outside of sports, cupping is also used to alleviate acne, shingles, breathing problems, arthritis, congestion, asthma and the common cold, among other conditions.

In an article on swimmingscience.net, the author contends that although the benefits of suction cup therapy for swimmers are not yet scientifically proven, athletes and therapists report the following advantages:

How does cupping work?

Trainers (or therapists) heat or pump air into glass (or sometimes silicone) cups in order to create suction on the skin and pull it away from the underlying muscles. The cups remain on the skin for five to 10 minutes. Initially, the process results in a tight feeling and may be uncomfortable when the cups are pulled off the skin. Others find the procedure pleasurable, like a deep massage. The resulting cupping marks (e.g., Phelps’ bruises) heal in a few days to a week.

In addition to Michael Phelps and a number of other swimmers who displayed evidence of cupping in Rio, the U.S. men’s gymnastics team also uses the system. The American gymnast Alexander Naddour spoke about the procedure in his Rio interviews, mentioning that he regularly employs cupping, even using a do-it-yourself method.

Several small studies have generated mixed results. One review compiled in 2012 of 135 cupping studies determined that the technique might have some benefits, particularly in the case of alleviating muscle tension. However, the review pointed out that most of those studies had basic flaws.

A recent New York Times Wellness blog quotes Leonid Kalichman, an Israeli academic who co-authored a review of cupping. He mentioned it is possible that those who undergo cupping experience a placebo effect. However, he endorses the possible physiological effect, as well. He speculates that it may be the case that cupping triggers a process that produces cytokines, small proteins that play a role in the immune response.

In any event, experts say the procedure is relatively safe. The only potential side effects include:

Michael Phelps may have grabbed the Rio headlines, but the first buzz among contemporary world-class swimmers who employ cupping dates back to when Australian Olympic gold medalist Grant Hackett sported cupping welts on his back at the 2004 Games. American multi-time Olympic medalists Natalie Coughlin and Nathan Adrian have also sported cupping bruises. Cupping is growing in popularity in swimming circles, such as its recent adoption by prominent college swim programs.

So, is cupping worth a try? If Michael Phelps does it, it’s guaranteed there will be followers. After all, who can argue with history? He has a record 28 Olympic medals, including 23 golds…and counting!

At Northeast Orthopedics and Sports Medicine (NEOSM), our sports medicine specialists provide outstanding care and medical support for sports-related injuries. We can help athletes of all ages and activity levels develop a customized treatment plan. For more information or to schedule an appointment, contact us today.